Hi, my name is Mike and I’m a new business idea hoarder.

Life doesn’t have to be this way. I developed a way to way filter these ideas so that I felt confident dropping most off at the dump and focusing my time and money only on the most promising idea of the batch. Below is a screenshot of my latest batch. In this post, we’ll use this list of five examples as a guide to quickly validate a business idea:

Don’t be a business idea hoarder

1. Does this idea spark joy?

Marie Kondo, the author of The Life-Changing Magic of Tidying Up and host of Netflix’s “Tidying Up with Marie Kondo”, developed a method for organizing known as the KonMari method. The method involves gathering belongings and then only keeping those that spark joy. Most business ideas, if successful, will alter the course of your life so if the idea doesn’t spark joy then politely boot it into the trash. This should take about 30 seconds per idea because it’s a gut decision.

Digital prenuptial: No, I have no interest in spending my time helping the world get more prenups. I don’t think it’s a bad idea, nor do I believe that prenups are inherently bad, it just doesn’t spark joy for me.

Digital estate planning: No, I recognize that estate planning is really important and that a product like this should exist, but I’ve never had the issue myself, nor been on the other side of the table helping others do estate planning, so it’s difficult for me to strongly empathize with the pains of estate planning.

An app that tracks your impact on the earth rather than calories: Yes, I love the idea that we could help improve the world and take a mind, body, and earth approach to health. This is very exciting for me.

Undercutting the national flood insurance market: Yes, mainly because I love working with geo-data and the idea of having a distinct competitor (FEMA) is exciting to me.

Bring your idea agency: Yes, I love assessing new businesses and being able to give 360-degree advice from market research to tech to marketing.

2. Why hasn’t someone done this yet?

If you don’t know the answer, you haven’t done enough research. That said, it’s super easy to sink a ton of time into this. I average about 30-minutes per item but some take longer than others. Budget an hour and move onto the next in an hour. Answer these five questions:

An app that tracks your impact on the earth rather than calories:

Is it possible? Yes, the proof is in the fact that it’s being done already.

Does it require a ton of cash? No, it’s a digital product that can rely on many existing APIs and internal scoring.

Is there money in this? Yes, a ton of models I saw in the brief research was support purchasing green products and carbon offsetting. I didn’t see a subscription but there’s an opportunity there too.

Do you know something everyone else doesn’t know? No.

Has someone already done this? Yes, turns out tons of folks have done this, a simple search for “buy flood insurance” returns a ton of competitors to FEMA’s flood insurance program (see screenshot below).

Is it possible? Yes, the proof is in the fact that it’s being done already.

Does it require a ton of cash? Yes. Theoretically, you can find an insurer-as-a-service to underwrite everything on the backend but to get to the point where you’ve built a confident, tested, model that rezones the coasts with geo-data is a significant, and pricy undertaking.

Is there money in this? Yes; it’s insurance. Of course, major climate-change impacts is a major risk here.

Do you know something everyone else doesn’t know? No.

Has someone already done this? Yes, at its core it’s an agency model, many firms have taken the software or physical product angle here. My search was loaded with firms looking to help build MVPs, including but not limited to Airdev, Solvd, Purrweb, Buildmympv. I like the fixed price model which is being done by many of these. However, many of the firms I encountered either focused on coding support rather than the 360-degree views from product > marketing > customer research > development.

Is it possible? Yes.

Does it require a ton of cash? No, it’s an agency model.

Is there money in this? Yes; but I’m guessing it will be remarkably difficult to build a flywheel for a small-business/startup agency like this.

Do you know something everyone else doesn’t know? Yes, being a former market researcher, an expert in Fintech, a digital marketer, and a full-stack developer puts me in a solid place for a Fintech-focused go at this.

Based on my analysis above, one hour and thirty minutes later, we’re down to one idea: An app that tracks your impact on the earth rather than calories.

Pursuing a business idea has tons of tradeoffs. Assess three costs to further filter your idea:

I took an entire year to become a confident full-stack developer for little more than $75 in Udemy courses. My time cost here wasn’t $75 though. The real-time cost was forgoing my salary as a market researcher for a year. I could have taken my “profits” and tried to hire someone to build the product for me.

I moved back into my parents’ home at 28 years old. On one hand, it’s easy when you’re single to do this, but it decimates prospects for a new relationship. Fortunately, I’d built up a bank of friendships to help me counter the inevitable loneliness that comes with starting a startup.

I could have hired two full-time developers from overseas to build my product, but having never managed a team like this, I’d probably end up spending at least $40,000 to build out my product and I didn’t have $80,000 laying around.

An app that tracks your impact on the earth rather than calories.

Here's a screenshot of my quick estimates in Excel: 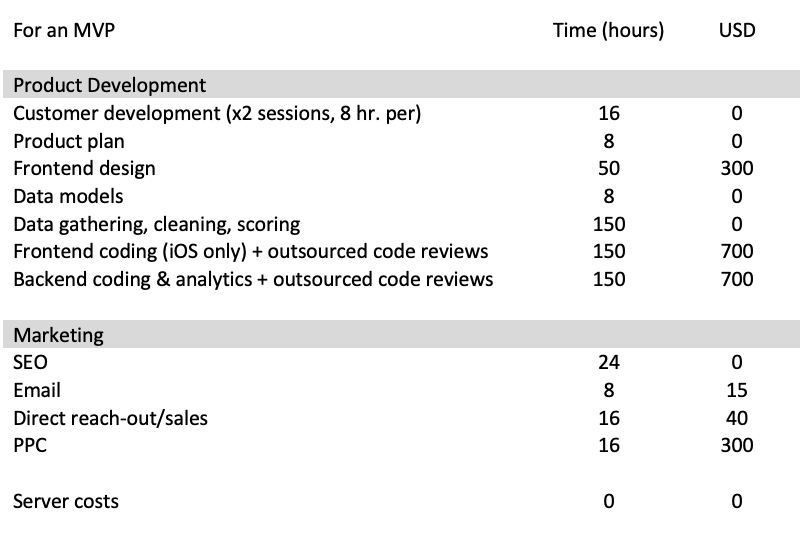 In the end, I added this idea to the trash. The reason was ultimately the emotional cost. I spent ten months building Sincerity only to delay the launch due to COVID. Ten months for not a single customer feels like shit. On the other hand, I started The User Interview Exchange, and seeing product market fit feels like the emotional win I need at the moment. Going back to square seems insurmountable right now.

4. Who else cares about this?

Before you start building you need to find out if anyone else cares and if they do, who they are, why they care, and where they reside. Conduct eight quality user interviews to determine if others care about your idea. If they do; who is the customer persona? I’ve written extensively about how to recruit participants for user research and how to conduct user research.

If conducting the user research feels like an arduous task, I suggest you revisit step 1. 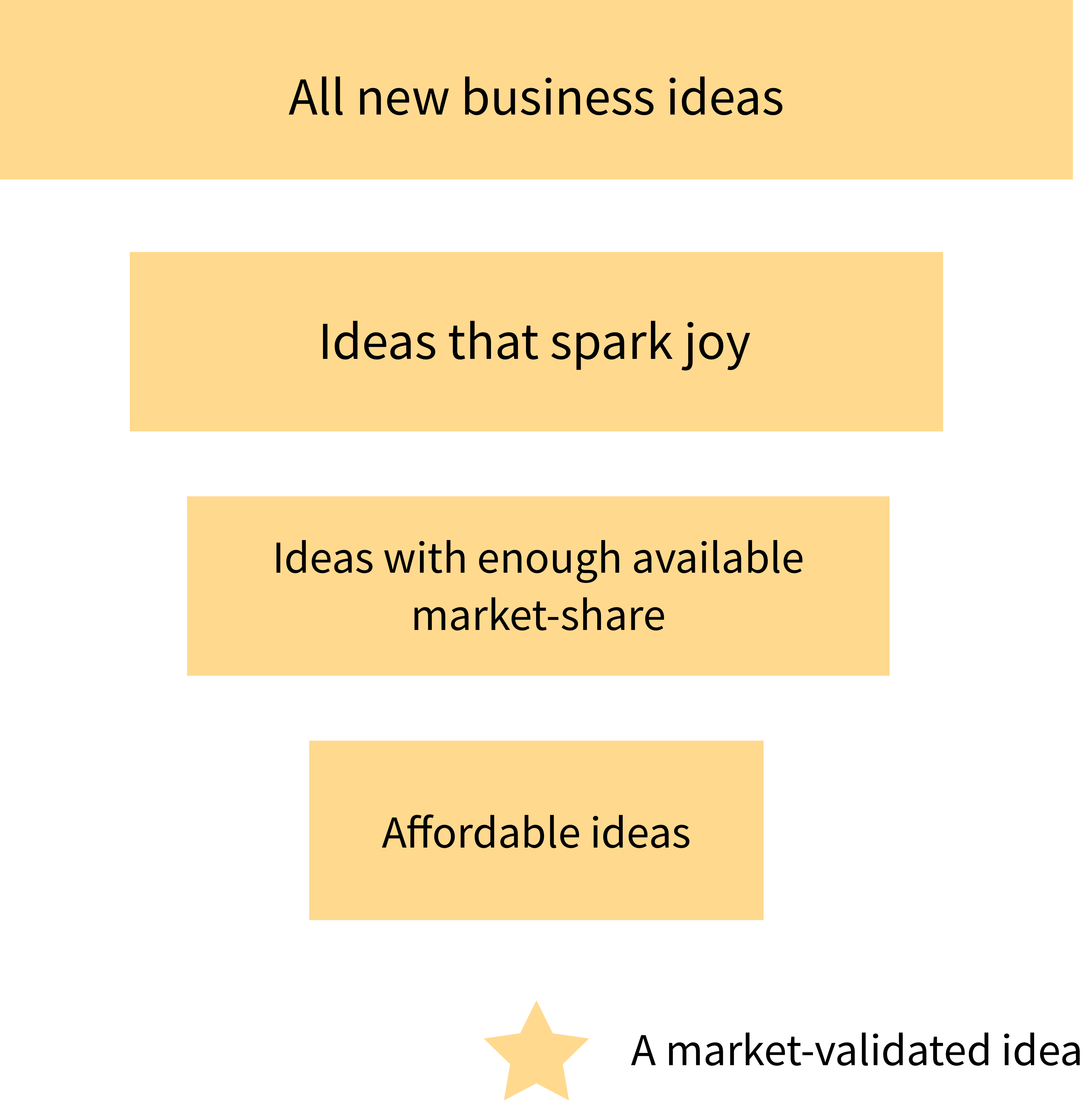 Don’t be an idea hoarder. Move new ideas in and out with ruthless efficiency. The worst-case scenario is that you get better at testing and learning. 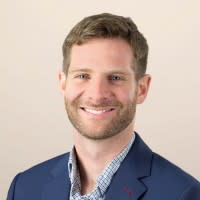